How to Write a Bestseller According to Veronica Roth, Author of “Divergent” Trilogy

What does it take to write a novel that captivates global audiences and lines the walls of bookstores around the world?

If anybody knows, it’s Veronica Roth — the bestselling author of the Divergent trilogy and the recently released science fiction novel, Carve the Mark.

Veronica published her debut novel at the age of 22 after she graduated from Northwestern University. She wrote the book on winter break of her senior year, and the novel was an overnight success — soaring to the number #1 spot on The New York Times bestseller list and inspiring two more sequels, Insurgent and Allegiant, both of which made the list. The trilogy was adapted for the big screen after Veronica sold the film rights to Summit Entertainment. In January of this year, Carve the Mark also landed on the major bestseller lists.

In this IVY Magazine interview, Veronica discusses how she capitalized on her creative prowess to reach literary success. Combining hard work with a thick skin, she reveals how following a creative dream led to her meteoric rise — and the tools all aspiring authors can employ to get published and approach their work with thought, productivity, and value.

When you’re sitting down to write a new book, where do you start?

You can’t think of everything as feeding to a purpose. Some things will never enter my writing, but I’m still curious about them. You never know what’s going to spark an idea, so you have to remain open.

When I go about creating a fictional universe, it’s chaos.

I try to latch onto one specific thing. The tendency I have is to think generally, and that is not terribly helpful for writing, so you just need one scene, one idea, one character, one line of dialogue. You have to focus as narrowly as you can, and then build a scene from that and try not to think about trying to write a book. Writing a book is a scary proposition — so you just have to focus on one thing at a time.

The challenge is making a world that feels like it has an emotional reality, even if it’s not real to us. (Because, you know, we don’t live in a galaxy far, far away.) So it’s going to seem fake, but you have to build it in such a way that people will take the leap with you.

What is your process for creating a fictional universe?

When I go about creating a fictional universe, it’s chaos. The process changes depending on what story I’m writing.

Sometimes, you don’t know which ideas are the good ones until you try them. I will give anything a try, and you can kind of tell when you’re writing something that’s not working — I feel it in my gut.

With Divergent, I just wrote all of the scenes that I had ideas for, all at once. They were in the wrong order — it didn’t feel like a book, it felt like a series of vignettes — and then I went back and connected the dots between them. I wrote all the scenes with Tris and Four, the love interest. They had good chemistry in my mind, and I knew how they would go, so I wrote everything with them first.

With Carve the Mark, it’s a big universe and it has a lot of points of inspiration, so it’s a little different from Divergent. It wasn’t just one idea — it was one hundred ideas mashed together into one. I just followed my curiosity, which is my motto these days.

Do you think the setting is important?

I do think setting is super important. It could become a huge part of what makes the story work — setting and story have to work together. Yet, I feel sometimes people really fall in love with their world, and they forget that we need to be propelled through that world. Not everyone will see it in the way that you do. So, what we need is a character with an interesting struggle that will carry us through it.

I think the setting and story need to be held in tension with each other. For me, I guess the story is a little bit higher on the priority list, but I also write super commercial fiction, so it depends on what kind of story you’re writing.

How do you tackle the rough draft? What do you prioritize during this stage of writing?

In the rough draft, just throw everything in. When you’re done, you figure out what the story needs and what the world needs. Take all the ideas and trust that you will have enough for the next story that you want to write. That’s how stories work, right? They’re like a mountain. They build, build, build, build, build, reach a peak, and then like decline. I don’t think it needs to be so strict, but it does help me.

I map things out on the mountain, but I don’t do this during the rough draft phase. In the rough draft phase, I just get it done. A lot of people get stuck in their story and they can’t finish a rough draft, and that’s really hard because you can’t fix something that isn’t there. So you need it to be done first.

Someone who’s not afraid to give me feedback is someone I want around.

That’s my first piece of advice. Then, I’ll map the story on a graph to make sure that each scene that I’m putting in is building me toward where I need to go. You have to know where you’re going: what’s your big climactic moment? What’s the emotional peak of your story?

Figuring that out helps the beginning of each scene and the end. There needs to be a change. So a scene goes from positive to negative, for example, or whatever it may be. No hand motions. Or a negative to positive, or a negative to more negative — but whatever happens, it has to have change. Otherwise, what’s the point of it? What is it doing for you? You can build world and build character and build all kinds of things inside of plot.

Trying to be efficient with space is one of my favorite things about revising. It’s like: let me figure out how many things I can make this scene do for me.

How do you go about getting an agent?

I had one person who was interested in Divergent, and she didn’t think it needed a lot of editing before it went to publishers. I had another person who was interested in Divergent who had seven pages of notes. I knew it needed it more work, so I went with the one who’d given me notes. (I had also previously met her at a writer’s conference.) I trusted her notes, I think, the most. She had a good eye for what the story needed.

Someone who’s not afraid to give me feedback is someone I want around. Then, I revised with her: I added maybe 30,000 words to the manuscript, which was 30% more than had already been in the book, and she submitted it to editors that she thought would be interested in that kind of book. Four days later, I got an offer.

What is the biggest mistake that writers make?

I think the biggest mistake that writers make is going out with their work too early: not getting enough critique, not doing enough revision. Sending unpolished work is just frustrating for everyone. It’s not worth it. It’s worth the extra time, so being patient with your work and with yourself is really important. Especially for young writers, which is usually who I’m talking to.

When you’re young you want everything to happen all at once — I get that, because I was like that. But really being sure that you’ve put in the work in the beginning will save you from a lot of frustration.

Any general advice you would give to writers?

My biggest piece of advice for writers is to stay focused on the process instead of the result. I’m someone who’s always loved writing. Yet when you get caught up saying, “Oh, I’m going write this book; I’m going to have this success; I’m going to achieve these things” — you can’t always control those things.

What you can control is the work. If you can fall in love with that, then you can bounce back from a huge range of failures. If you love the writing, then it will carry you through all of that difficulty.

If you can focus on loving the process, then you can bear a lot of scrutiny and deal with a lot of failure and criticism.

What mentality do you think is important to have as a writer?

Focusing on the process instead of the product is really important to me. I was reading Yes Please by Amy Poehler, and I think she talks about this — that the successful people that she knows really don’t care that much about the achievements or the results of their work, but they love the work itself.

When I read that, it helped me understand myself better. All the stuff that we talk about — and I’m not trying to be an asshole — but I don’t care that there was a movie made, or how many copies it sold. I care about the work itself, and that’s made it okay to fail constantly and to be critiqued by strangers. I’m just going to keep writing even though no one will publish this. I may have to get a different job, but like, that’s okay.

If you can focus on loving the process, then you can bear a lot of scrutiny and deal with a lot of failure and criticism. Because at the end of the day, you like the work you’re doing and think it’s valuable in and of itself — and not for what it will bring you.

IVY is the world’s first Social University. Our mission is to educate and inspire future leaders. To learn more and attend live events near you, please visit IVY.com. 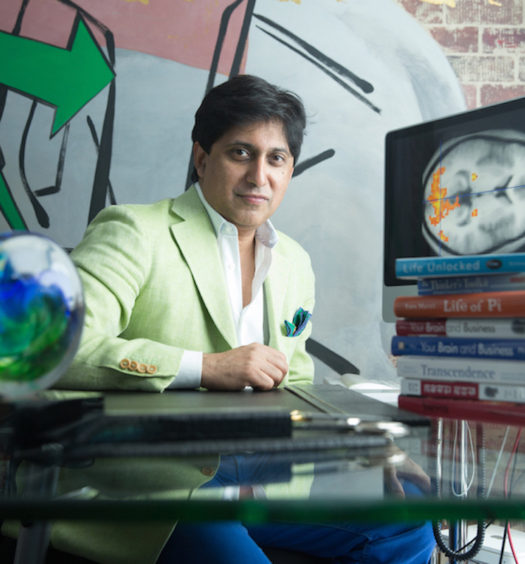